A New Era of Wind Tunnel Testing for Drones

Wind tunnels are a valuable piece of equipment used to characterize aircraft aerodynamics. As drones become more advanced and established, wind tunnel testing has become a more common part of the design process. The testing needs of drones are unique, which has caused a shift in the style of wind tunnel testing used to assess them.

What is the purpose of wind tunnel testing?

Wind tunnels are an excellent tool for producing wind flows in a controlled setting to replicate flying conditions. By using one or more fans to force air over an object, one can visualize the interaction between an aircraft and the surrounding airflow in order to predict its aerodynamics and performance. Some wind tunnels are large enough to test full size aircraft while others employ smaller model aircraft to make assumptions about the full size versions.

Figure 1: Installing a model aircraft in the test area of a wind tunnel

How are wind tunnels used in drone design?

Wind tunnels can help engineers improve the design of their drone by identifying areas where the lift: drag ratio can be improved. More advanced wind tunnels can also simulate turbulence and sideways wind flows to study flight performance. For drone operations, this can translate into improved flight times and improved resistance to turbulence.

The majority of drone testing can be performed in subsonic wind tunnels, which produce airflows at less than the speed of sound. The size of the wind tunnel required depends on the size of the drone and the genre of testing performed. A larger tunnel will be required for free flight testing compared to testing a mounted drone, for example.

Drone testing has different demands than traditional aircraft testing, so there is a shift in the techniques being used and made available. Here we will look at traditional and up and coming techniques designed specifically for the drone industry.

In traditional wind tunnel testing, wind is generated by a fan and passed through a test area where the object of interest is installed. The tunnels themselves vary in size and shape based on the testing requirements of the aircraft. 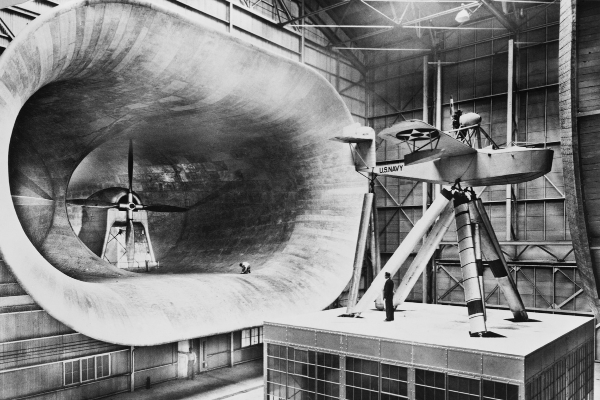 Wind tunnel tests may use a combination of air pressure sensors, force balances, and physical indicators like smoke, oil and paint to characterize how an object interacts with a wind flow. Advanced methods include pressure sensitive paint, which changes colour with variations in pressure, and particle image velocimetry, which uses a laser sheet to track the velocity of particles passive through a plane in the test area.

Traditional wind tunnels are classified by the speed of the air passing through the test section relative to the speed of sound (Mach 1). They are divided into four categories: subsonic (Mach <0.8), transonic (Mach 0.8 – 1.2), supersonic (Mach 1.2 – 5.0), and hypersonic (Mach >5.0). The category limits are based on the magnitude of compressibility effects that must be considered for flights at that speed. As flying objects move faster and faster, they compress the surrounding gases, thus changing the fluid density and altering the amount of force on the aircraft. This effect does not occur at subsonic speeds, but has unique effects at transonic, supersonic and hypersonic speeds, hence the categorization.

Tunnels come in many configurations, but open and closed return tunnels are most common, differing in their shape and how the air is circulated. For supersonic testing, blowdown style tunnels may also be used, which rely on a pressure difference between a high pressure basin upstream of the test area and a low pressure reservoir downstream of the area to produce airflow. The majority of drone testing occurs at subsonic speeds, with the exception of certain high performance military UAVs, so this article will focus on subsonic wind tunnels. 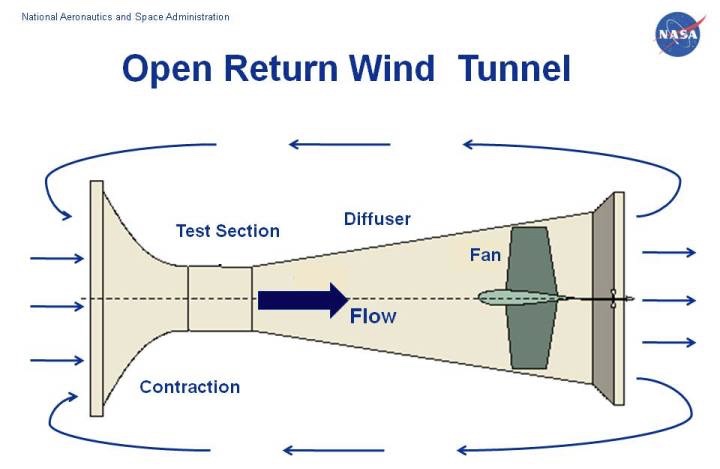 Closed wind tunnels use a self-contained circuit that recirculates air within the tunnel through the test section (figure 4). The tunnel is not open to the test environment surrounding the apparatus, so the same air is circulated over and over again. Turning vanes help to create smoother changes in direction for the airflow throughout the tunnel. Closed wind tunnels are also known as “Prandtl tunnels” after Ludwig Prandtl who developed the first theories on supersonic shockwaves. They also go by “Gottingen tunnels”, named after the German research laboratory where they were first used. 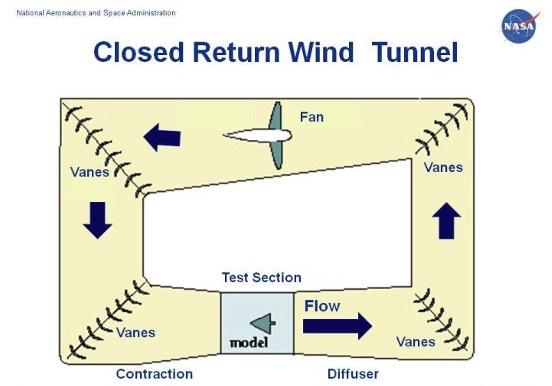 The benefits of traditional wind tunnels include their ability to produce very high speed air flows and their ability to restrict the test area. That said, restricting the test area also makes it more challenging to test the aircraft in motion since space is limited. Models are often used in traditional wind tunnel testing since tunnels able to test full size aircraft are extremely costly to build. The world’s largest wind tunnel, measuring 80' x 120’ and based at the NASA Ames Research Center in California, was constructed through the modification of a smaller 40' x 80’ wind tunnel. The project budget in 1979 was $85 million USD, equivalent to about $325 million USD today.

As technology and testing needs have evolved, so too have the possibilities for wind tunnel testing. On one end of the spectrum, the physical setup is replaced entirely with ultra realistic computer simulations of objects and airflows. At the other end of the spectrum, test areas have grown with open air wind tunnel designs that allow for more extensive free flight testing.

Figure 5: Visualization of airflow over a wing flap by AirShaper

Computer-based wind tunnel simulation, or computational fluid dynamics (CFD), can be used independently or work hand in hand with physical testing to obtain a thorough understanding of an object’s aerodynamic properties. In budget-limited projects, simulation may be the only method used to evaluate an object, whereas in larger projects it may inform and compliment physical wind tunnel testing.

Computer-based programs can start with as little input as a 3D model or 3D scan of an aircraft. The model is uploaded into the testing software and subjected to different simulated wind conditions. The user can control the wind speed, angle of attack, aircraft movement, and the properties of the fluid. The results of the simulation provide key information such as wind shape, surface pressure, and wind flow separation along portions of the aircraft (figure 6)

The information provided by these simulations can point out locations where laminar flow is disrupted and opportunities to increase the aircraft’s lift: drag ratio. 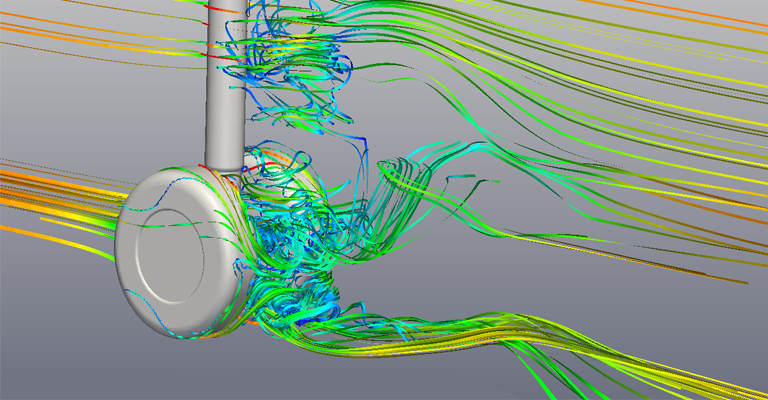 Overall, CFD is a very cost effective way to collect theoretical aerodynamic data about an aircraft, especially as the technology becomes more and more advanced. However, at the end of the day, the theoretical data is just that, theoretical. For certain applications it may be sufficient to go from simulation to field testing, but for many projects, physical testing in a wind tunnel provides greater peace of mind.

Open air wind tunnels differ from traditional wind tunnels in that the test area is open to the environment and not enclosed within a tunnel. A wall of fans produces a 3D wind flow based on a three variable function (x, y, z) input by the user with the wind tunnel’s software. The function communicates information to individual fans, which can produce any kind of wind profile, such as waves, wind bursts, etc. The programmed wind flow is directed through an open test area where the aircraft is located (figure 7). This allows the aircraft to fly freely without needing to be mounted in place. Open air testing also offers the option to have multiple walls of fans, so the user can experiment with turbulence, side bursts, and simulated obstacles. 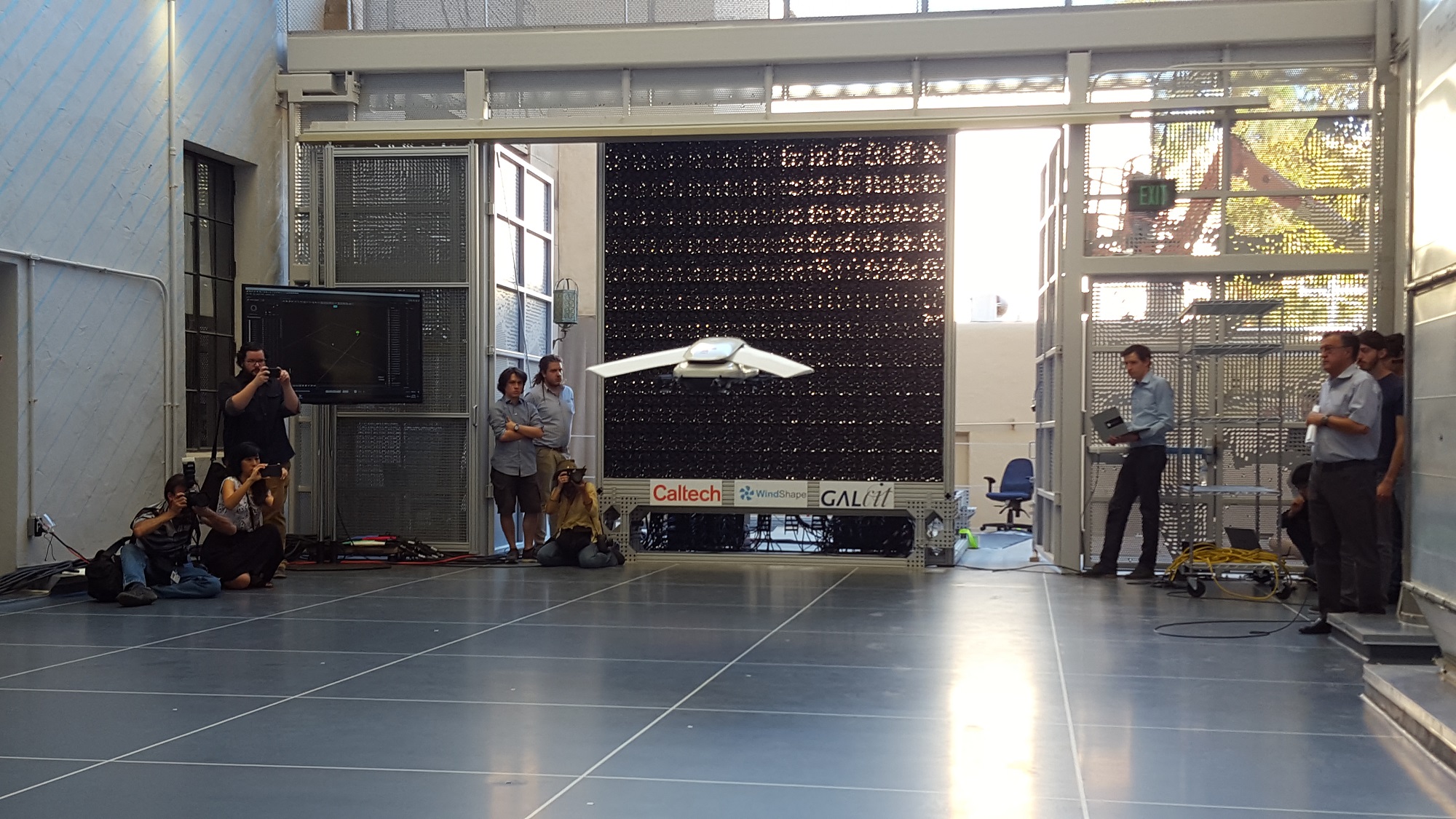 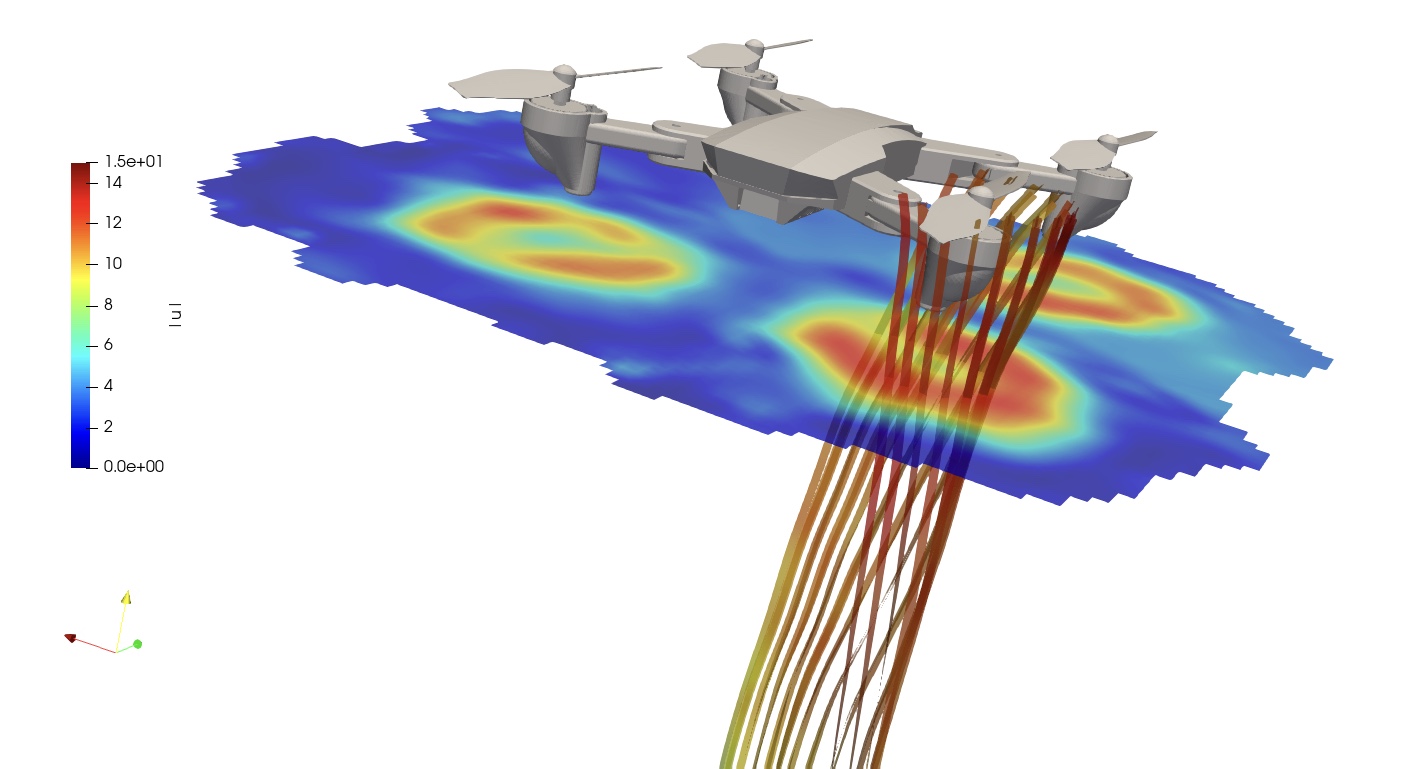 The diversity of wind profiles produced with one or multiple walls of fans is great for simulating a flight through difficult weather or around buildings and terrain. This video by the government of Canada provides a great demonstration of the challenges of urban flying, and the kind of skills inner-city pilots must develop. Drone applications such as disaster relief, urban air mobility, building inspections and delivery services can greatly benefit from this type of testing.

Because of the openness of the test area, open air wind tunnels also offer the possibility of testing take-off and landing configurations and climatic effects. The WindShaper has a tilting function that allows it to rotate the wind wall up to 90 degrees or parallel to the earth. This allows the user to practice the most critical phases of flight while simulating ground effect, thermal updrafts, crosswinds, etc. In addition, climatic effects can be included in the test area, adding rain, snow, fog, smoke or icing conditions to the system (figure 9). 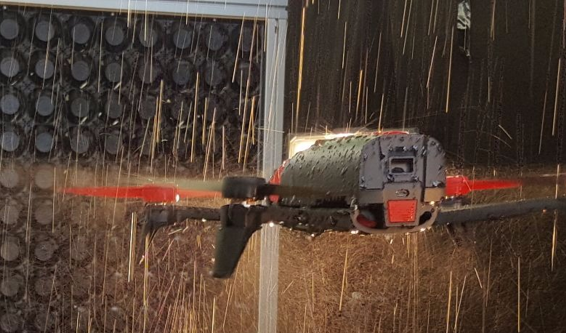 Open air wind tunnels are relatively inexpensive compared to traditional wind tunnels with the same cross-sectional test area. They therefore provide more feasible free flight testing so drones can be tested in the prototype and final design stages. So far no open air wind tunnels have been constructed that reach transonic speeds, which is one downside of the model. That said, outside of military operations, most drones operate in the subsonic range, and at the lower end at that.

Here is a comparative summary of the three categories of wind tunnel testing methods. 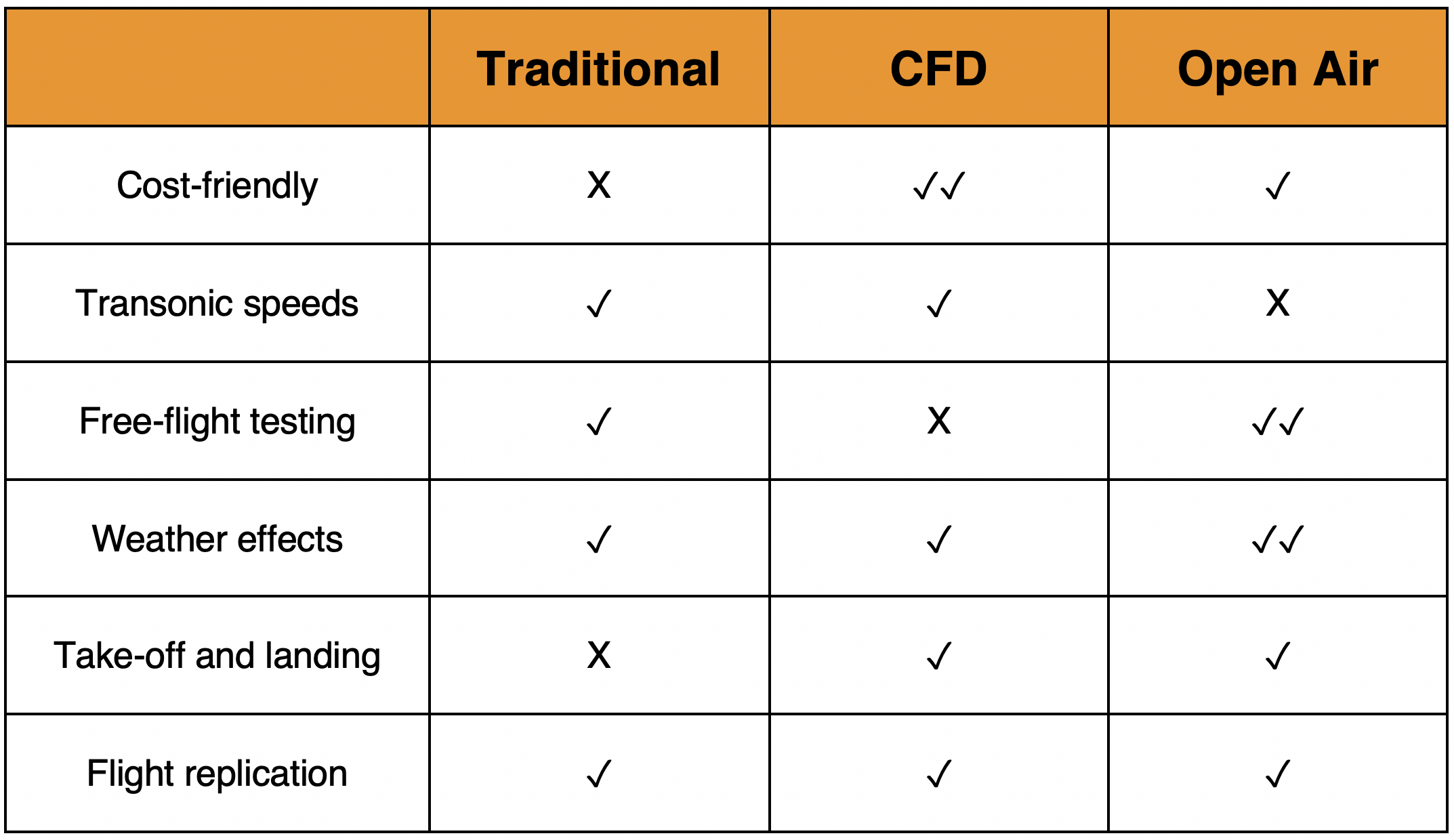 Drone operations have become increasingly common in recent years and have become more and more involved in civilian life. They have tremendous potential to benefit humankind, but at present, the drone failure rate is two orders of magnitude higher than in commercial aviation. Social acceptance is critical for the advancement of the drone industry, so there is great motivation to reduce the incident rate. Wind tunnel testing will play an important role in optimizing and validating drone designs so they can become safer and more reliable.