2.​ What describes your problem?

Please find within the following table which describes your problem. Once selected, mark down the troubleshooting points to follow.

If you are planning to run dual-motor testing, we recommend starting to read the whole document from section 3.1.

3.1​ What is back-to-back and face-to-face testing and which configuration shall I choose to test?

In a dual-motor testing environment, you may have two motors and propellers to be mounted on a propulsion system in order to increase the output thrust and neutralize the torque without adding much extra structure on the drone.

In the Series 1780 Thrust Stand and Dynamometer, the following versions may allow you to run coaxial tests:

The nature of the dual-motor testing introduce some new parameters:

There are also a few extra parameters when it comes to controlling two motors and ESCs: the rotation speed difference between two propellers and the air speed and pressure generated by the propeller in the front. It is complicated to model all these parameters in a single test and we suggest to first find out the target setup you may need to start a test.

Generally speaking, most of the coaxial propulsion systems on a UAV use the back-to-back design. The advantage of a back-to-back design is mainly that both motors are mounted onto the same drone frame structure and may potentially reduce the material and weight on the drone structure.

If you wish to use the Series 1780 Dynamometer to run back-to-back tests, please keep in mind that there is a minimum coaxial distance imposed on the thrust stand. You may not be able to reach the desired distance between your two propellers due to the distance restriction. See section 3.2 for more details about the coaxial distance that you may reach.

From what RCbenchmark has tested internally, we found out that the difference between a back-to-back setup and a face-to-face setup is not significant when all propellers are large enough. The smaller the propellers are, the smaller the thrust they may generate and thus make the drag effect more obvious and the test result less accurate. When your propellers are larger than 32” on the 25 kgf and 40 kgf version thrust stand, and larger than 40” on the 75 kgf version thrust stand, you may convert the thrust stand into a face-to-face setup to run the coaxial tests in order to a lower coaxial distance.

​3.2​ What is the coaxial distance and how shall I define this value?

As stated in section 3.1, the coaxial distance, defined as Z, is the physical distance between two propellers on the axial direction. This parameter is significant to the dual-motor testing because it determines the airflow inlet from the upstream propeller towards the downstream propeller.

When doing coaxial testing, it is extremely important to have two motors counter-rotating. This means one propeller in clockwise direction (CW) and another in counterclockwise direction (CCW). They must generate either push or pull (thrust) in the same direction, while attempting to neutralize the torque. 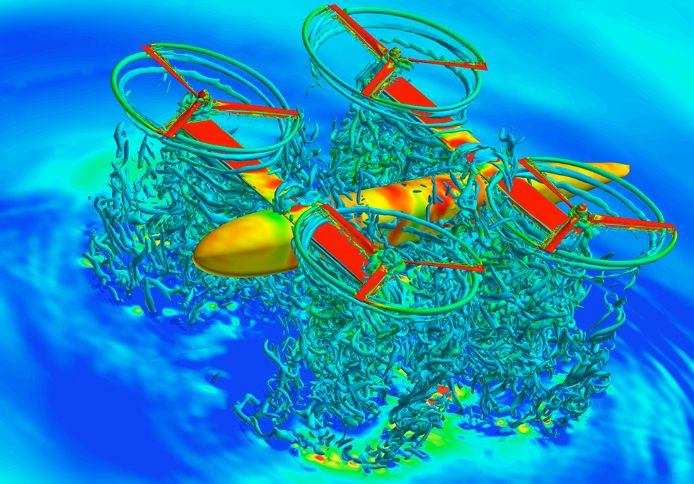 When it comes to airflow, the upstream propeller will generate air flowing through both axial and radial directions as you may see in the figure above. This will require the downstream propeller being able to attack the incoming airflow in both directions.

The smaller the Z is, the closer those two propellers become. After the acceleration and twisting, air flows out from the upstream propeller with axial and radial speed and pressure and the closer the downstream propeller is placed, the more turbulence and more severe radial resistance it must suffer.

The smaller the Z/D factor is, the more easily the downstream propeller being affected by the turbulence. You may observe negative thrust or torque and other phenomena related to the low Z/D factor.

To start the test, we suggest to first try testing in a face-to-face setup and reach the minimum Z/D factor of 0.15. Gradually increase this factor and make measurements until you can reach the best efficiency, mark down the Z distance and see if you may reach it with the back-to-back coaxial:

It’s hard to predict the overall performance of a coaxial system without testing realistically different Z/D factors. Please also keep in mind that when two propellers have different diameters and pitches, the optimum Z/D value may also differ.

In a common application, some theories indicate that we shall have the downstream propeller larger in diameter and higher in pitch: it can theoretically avoid the downstream propeller under full turbulence and an increased attack angle can also help to tackle the counter-rotating air flow. You may see some of our tests on the RCbenchmark database:

3.3​ What is the radial offset distance and how to manipulate this value?

Radial offset distance, shown as e in the figure located in section 3.1, is the offset of two central axes in any radial direction. In most of the dual-motor or coaxial propulsion systems used on drones, designers tend to keep both motors on the same axis thus a zero radial offset.

There are multiple constraints for a radial offset or a smaller overlapping percentage. One of the major disadvantages of radial offset is mainly about the complexity when designing the flight control system. The extra motor and propeller in a different position may increase significantly the complexity of the flight control design as each motor may be regarded as independent. Drone’s frame and position restrictions can also impose obstacles for a larger radial offset.

On the thrust stand Series 1780, you may be able to adjust the radial offset with certain setups. Please keep in mind that the diameter difference between two propellers, and the axial offset distance may also affect the optimum thrust. See section 3.4 to learn more about how to start a coaxial design and testing.

3.4​ To put everything together: how to start coaxial tests?

As we have introduced different parameters in the previous sections, we will then focus on how to put everything together and to start planning dual-motor propulsion system design.

First, to summarize all the factors that we have mentioned earlier:

To start a design:

Unfortunately, the Series 1580/1585 does not support dual-motor control and testing. If you wish to test dual-motor, we suggest using the Series 1780.

The Series 1580/1585 can only be communicating with ONE computer at a time, the software cannot support multiple opening sessions.

When you have propellers larger than 18”, we suggest using the Series 1780 for your coaxial testing.

If you still cannot solve your problem, click here. We support all issues related to the measurement tools itself, and we can provide limited support regarding your test setup and power-train selection. You may go to our online database to obtain more information: